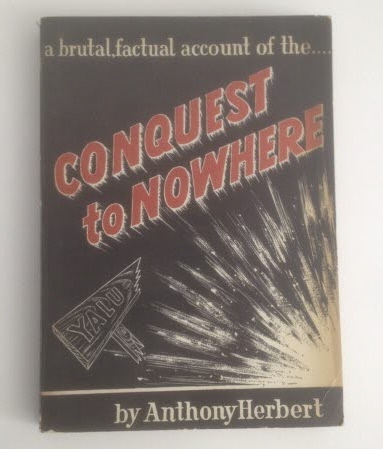 By: Herbert, Anthony in collaboratin with Robert L. Niemann

B&W Illustrations; This is a trade paperback book. The book is in Very Good to Near Very Good+ condition and was issued without a dust jacket. The book and its contents are in mostly clean, bright condition. The rear cover has some light rubbing and there is an ink stamp (PAID) on the rear cover as well. The text pages are clean, but noticeable toned due to the acid content of the paper. "It take guts to live with what you've read. This story was written by a man who actually did live it. It reveals the horror of futility, the brutality that is man pitted against man, and in the end, you too, are part of the overall degradation that must exist in our never ceasing war against tyranny." From Wikipedia: "Anthony B. Herbert (born 1930) is a retired United States Army officer, who served in both the Korean War and the Vietnam War. He is best known for his claims that he witnessed war crimes in Vietnam, which his commanding officer refused to investigate. He reached the rank of lieutenant colonel and is the author of several books about his experiences, including Soldier and Making of A Soldier."