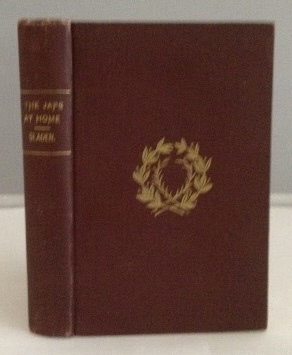 The Japs at Home Fifth Edition: To Which Are Added for the First Time Some Bits of China

B&W Illustrations; This book is in Very Good+ condition and is lacking a dust jacket. The book and its contents are in clean, bright condition. There is some light rubbing and bumping to the spine ends, corners and edges of the book covers. The text pages are clean and bright. The endpapers have some light but noticeable toning and beginning foxing. There is a bookseller's ink stamp on the front endpaper along with a previous owner's inked name. "This volume contains all that was in the first four editions of The Japs at Home with the addition of seven chapters of Bits of China, picked up during a brief sojourn among the Celestials. These chapters are illustrated with numerous pictures by a brilliant Japanese artist." "Douglas Brooke Wheelton Sladen (5 February 1856, London-12 February 1947, Hove) was an English author and academic. Educated at Temple Grove School, East Sheen,Cheltenham College, and Trinity College, Oxford, in 1879 Sladen migrated to Australia, where he became the first professor of history in the new University of Sydney. Subsequently he traveled much and settled in London as a writer. Poems by Margaret Thomas were included in a work in the 1880s."

Title: The Japs at Home Fifth Edition: To Which Are Added for the First Time Some Bits of China

The Japs at Home Fifth Edition: To Which Are Added for the First Time Some Bits of China