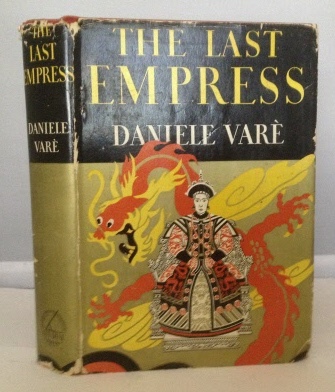 B&W Illustrations; This book is in Very Good+ condition and has a Very Good- dust jacket. The book and its contents are in mostly clean, bright condition. There is some light bumping to the spine ends of the book covers. The top edge of the rear panel has some water spotting. The text pages are clean and bright. There is a previous owner's inked name on the front endpaper. The dust jacket has several edge nicks, small tears and chips missing, along with edge wear and rubbing. "Tzu-Hsi, Dowager Empress of China, the last of the great Asiatic rultes, died in 1908. Four years later Signor Var arrived in Peking as Secretary to the Italian Legation. The Chinese Empire had collapsed, the Manchu dynasty had been swept away, the West had won a bitter victory, but the personality of the woman who had dominated China for over half a century still lingered in the dusty streets and painted pavilions of the Forbidden City." "Empress Dowager Cixi1 (also romanised as Empress Dowager Tzu-hsi; 29 November 1835 15 November 1908), of the Manchu Yehenara clan, was a Chinese empress dowager and regent who effectively controlled the Chinese government in the late Qing dynasty for 47 years from 1861 until her death in 1908. Selected as an imperial concubine of the Xianfeng Emperor in her adolescence, she gave birth to a son, Zaichun, in 1856. After the Xianfeng Emperor's death in 1861, the young boy became the Tongzhi Emperor, and she became the Empress Dowager. Cixi ousted a group of regents appointed by the late emperor and assumed regency, which she shared with Empress Dowager Ci'an. Cixi then consolidated control over the dynasty when she installed her nephew as the Guangxu Emperor at the death of the Tongzhi Emperor in 1875, contrary to the traditional rules of succession of the Qing dynasty that had ruled China since 1644. Although she refused to adopt Western models of government, she supported technological and military reforms and the Self-Strengthening Movement."