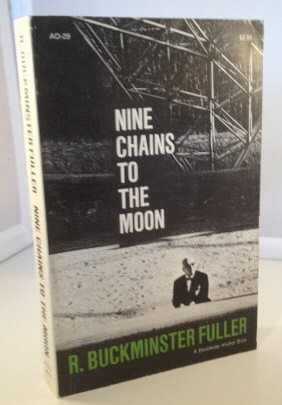 Nine Chains To The Moon

This is a trade sized paperback book. The book is in Very Good+ condition and was issued thus without a dust jacket. The book and its contents are in mostly clean, bright condition. There is some light bumping and rubbing to the edges of the book covers. The text pages are clean and bright. There is a previous owner's inked initials on the half title page. "This title of this book was chosen to encourage and stimulate the broadest attitude toward thought - if in imagination, all of the people of the world were to stand upon one another's shoulders, they would make nine complete chains between the earth and the moon. If it is not so far to the moon, then it is not so far to the limits, - whatever, whenever or wherever they may be." "Fuller taught at Black Mountain College in North Carolina during the summers of 1948 and 1949, serving as its Summer Institute director in 1949. There, with the support of a group of professors and students, he began reinventing a project that would make him famous: the geodesic dome. Although the geodesic dome had been created some 30 years earlier by Dr. Walther Bauersfeld, Fuller was awarded United States patents. He is credited for popularizing this type of structure. One of his early models was first constructed in 1945 at Bennington College in Vermont, where he frequently lectured. In 1949, he erected his first geodesic dome building that could sustain its own weight with no practical limits. It was 4.3 meters (14 feet) in diameter and constructed of aluminium aircraft tubing and a vinyl-plastic skin, in the form of an icosahedron. To prove his design, Fuller suspended from the structure's framework several students who had helped him build it. The U. S. Government recognized the importance of his work, and employed his firm Geodesics, Inc. In Raleigh, North Carolina to make small domes for the Marines. Within a few years there were thousands of these domes around the world."

Title: Nine Chains To The Moon

Nine Chains To The Moon