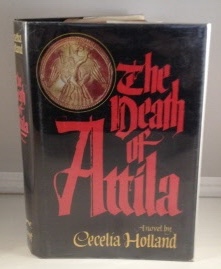 The Death Of Attila

This book is in Very Good+ to Near Fine- condition and has a Very Good+ dust jacket. The book and its contents are in clean, bright condition. There is some beginning fading to the bottom spine end of the book cover. The text pages are clean and bright. The endpapers (both front and rear) have some beginning toning / foxing. The dust jacket is clean and bright but does have several small edge nicks and chips, especially to the spine ends and corners. "Set in the fifth century, The Death of Attila deals with the conflict of Hun, Goth, and Roman. At the heart of the book lies the moving and dangerous attempt of two men to build a friendship across every barrier of race and custom. Dietric - the young, protected son of a German chief, awkward, not yet experienced in the ways of men and soldiering - believes, as naturally as he believes that the coming of Jesus Christ brought the world out of a terrible darkness, that the brutish, flat-faced Huns, the almost-savage invaders out of the East, are hardly more than animals." In the Autumn 2002 issue of in the Historical Novel Society magazine, Solander, Sarah Johnson writes, "What sets Cecelia’s work apart in the genre is not just her productivity but also her versatility; she has the unique ability to make most any historical period her own. She records the often harsh details of life in the distant—or recent—past and her depiction of it involves considerable research. Her character-driven plots often are developed from the viewpoint of a male protagonist. While including plenty of action (her battle scenes are noteworthy for their bottom-up viewpoint and understated verisimilitude) , her work focuses primarily on the life of the mind—whatever that might mean in a particular culture—and especially on politics, in the broadest sense."

Title: The Death Of Attila

The Death Of Attila