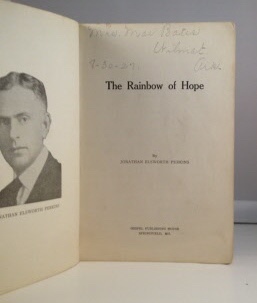 The Rainbow Of Hope

This is a trade sized paperback book with figured cardstock covers and a glued spine. The book is in good only condition. The covers of the book have edge wear, rubbing and bumping to the spine ends and corners. There is a large chip missing from the bottom spine upwards - approximately three inches. The text pages are mostly clean and bright. The inner hinges have wear and pulling. The front endpaper has a previous owner's pencilled name and address, and again on the title page, with a date of 1927. The author was part of the pentacostal movement, and especially the Anglo-Israel / Identity movement, including the ten lost tribes of Israel. "Reverend Jonathan Ellsworth Perkins was an associate of Gerald L. K. Smith. Perkins was a self-styled Pentecostal prophet. He was an early supporter of the Ham and Eggs pension plan. Perkins was originally form Ohio and was raised as a Methodist. He moved to Los Angeles in the early 1930s and several years later to Tulsa. Perkins first met Smith in 1945 when they protested the formation of the United Nations in San Francisco. He later headed Smith's California Committee of Pastors. Perkins was connected with a small mission in Los Angeles called the Emmanuel Army. Perkins was a relative of Reverend Gerald Winrod and once worked for him. In 1948 Jonathan Perkins supported the segregationist Dixiecrat wing of the Democratic Party. In 1949 Perkins had a falling-out with Smith and published a tell-all book titled The Biggest Hypocrite in America. "

Title: The Rainbow Of Hope

The Rainbow Of Hope