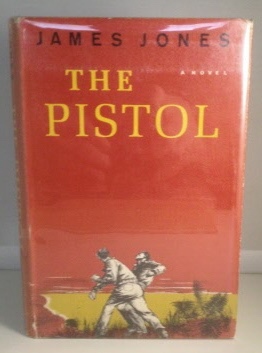 This book is in Very Good+ condition and has a Very Good dust jacket. The book and its contents are in generally clean, bright condition. There is some beginning rubbing and bumping to the spine ends and corners of the book cover. The top rear corner of the book cover has one light bump. The text pages are clean and bright. The edges of the text block have some beginning spotting / foxing. The edges of the dust jacket have some rubbing, bumping and lightish edge wear. The bottom spine end of the dust jacket has one inch tears to both front and rear spine joints along with some light rubbing and nicking to the spine end. The top spine end has some lightish edge wear and nicking. There is some rubbing to the flap joints as well. The rear dust jacket cover has some lightly ground-in dirt. (I hate to use the cliche here, but it actually looks better than it sounds). Overall, a very good+ solid copy. "Pfc. Richard Mast does manage to keep the pistol assigned to him for guard duty, and the struggle around it provides the pathos, savagery, and humor of the story. In the chaos of those first days and weeks of war, as Mast and his companions move from Schofield Barracks to the beaches of Oahu, then to a remote mountain pass, the pistol dominates the action." "James Ramon Jones was born and raised in Robinson, Illinois, the son of Ramon and Ada M. (ne Blessing) Jones. He enlisted in the United States Army in 1939 at the age of 17 and served in the 25th Infantry Division 27th Infantry Regiment before and during World War II, first in Hawaii at Schofield Barracks on Oahu, then in combat on Guadalcanal at the Battle of Mount Austen, the Galloping Horse, and the Sea Horse, where he injured his ankle. He returned to the US and was discharged in July 1944."

Title: The Pistol A Novel