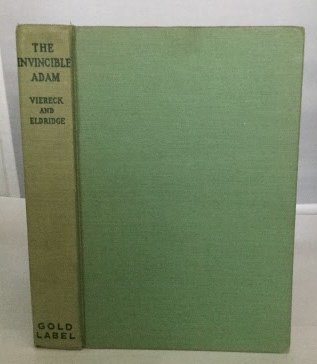 This book is in Very Good- condition and is lacking a dust jacket. The book and its contents are in generally clean, bright condition. The spine ends and corners of the book covers have some light bumping and edge wear. The spine of the book has noticeable toning. The text pages are generally clean, but have generalized, light toning, especially to the page edges. There is a previous owner's inked name on the front pastedown page. This is the third book in the Wandering Jew series. "George Sylvester Viereck (December 31, 1884 March 18, 1962) was a German-American poet, writer, and pro-Nazi propagandist...Viereck founded two publications, The International (of which the notorious poet and mage Aleister Crowley was a contributing editor for a time) and The Fatherland, which argued the German cause during World War I. Viereck became a well-known supporter of National Socialism. His interview with Adolf Hitler in 1923 had offered hints of what was to come. In 1933, Viereck again met with Hitler, now Germany's leader, in Berlin, and in 1934, he gave a speech to twenty thousand "Friends of the New Germany" at New York's Madison Square Garden, in which he compared Hitler to Franklin Delano Roosevelt and told his audience to sympathize with National Socialism without being antisemites. His Jewish friends denounced him as "George Swastika Viereck", but he continued to promote National Socialism."