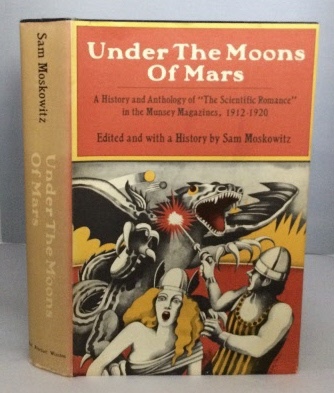 This book is in Near Fine condition and has a Very Good+ dust jacket. The book and its contents are in mostlyc lean, bright condition. The spine ends and corners of the book covers have some light rubbing and a couple of tiny nicks. The text pages are clean and bright. The dust jacket has some light rubbing to the spines and a small semi-closed tear to the top front panel. The rear panel of the dust jacket has some sections of fading / sunning and several small spots of ground-in dirt. "Moskowitz later worked professionally in the science fiction field. He edited Science-Fiction Plus, a short-lived genre magazine owned by Hugo Gernsback, in 1953. He compiled about two dozen anthologies, and a few single-author collections, most published in the 1960s and early 1970s. Moskowitz also wrote a handful of short stories (three published in 1941, one in 1953, three in 1956). His most enduring work is likely to be his writing on the history of science fiction, in particular two collections of short author biographies, Explorers of the Infinite and Seekers of Tomorrow, as well as the highly regarded Under the Moons of Mars: A History and Anthology of The Scientific Romance in the Munsey Magazines, 1912-1920. His exhaustive cataloging of early sf magazine stories by important genre authors remains the best resource for nonspecialists." "Munsey's Weekly, later known as Munsey's Magazine, was a 36-page quarto American magazine founded by Frank A. Munsey in 1889 and edited by John Kendrick Bangs. It is credited with being the first mass-market magazine. Frank Munsey aimed to publish "a magazine of the people and for the people, with pictures and art and good cheer and human interest throughout". Soon after its inception, the magazine was selling 40,000 copies a week. In 1891, Munsey's Weekly adopted a monthly schedule and was renamed Munsey's Magazine."

Title: Under The Moons Of Mars A History and Anthology of the Scientific Romance in the Munsey Magazines, 1912-1920