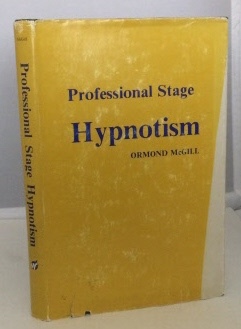 B&W Illustrations; This book is in Very Good+ condition and has a Very Good- dust jacket. The book and its contents are in clean, bright condition. There is some beginning bumping and rubbing to the spine ends and corners of the book covers. The text pages are clean and bright. There is a previous owner's inked name on the front endpaper. The dust jacket has generalized rubbing, edge wear, nicking, small edge tears and noticeable fading to the front cover. "Ormond Dale McGill (June 15, 1913 – October 19, 2005) was a stage hypnotist, magician and instructor who was considered to be the "Dean of American Hypnotists". He was also a writer and author of many books including Hypnotism and Mysticism of India (1979) and The New Encyclopedia of Stage Hypnotism. Born in Palo Alto, California, McGill became interested in magic as a child (and was later considered legendary in magic circles) , but first studied hypnosis in 1927 while still a teenager. He wrote the seminal Encyclopedia of Genuine Stage Hypnotism(the acknowledged bible of stage hypnotism) in 1947, and continued to teach courses and lecture right up until a few days before his death. He died in his native Palo Alto. He has explained in his book about position of chicken that present them as motionless and appear as hypnotized. McGill explained that the reason for a chicken's hypnotism was due to the tonic indolence that the chicken adopts to save itself from predators by bluffing them as being dead."