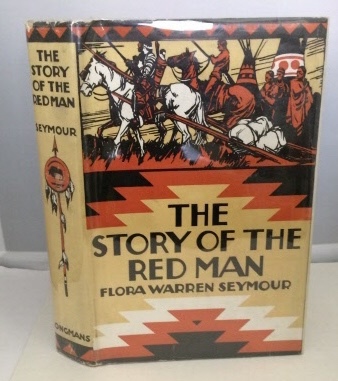 The Story of the Red Man

This book is in Very Good+ to Near Fine- condition and has a Very Good+ to Near Fine- dust jacket. The book and its contents are in clean, bright condition. The text pages are mostly clean and bright with the exception of several pages that have toning / foxing (title page especially). There is foxing to all edges of the text block. The dust jacket is crisp and clean, but has a couple of small nicks and chips to the spine ends. "The race epic of the American Indian is told here for the first time. Here also is a new history of America, for our pageant of pioneering has never before been presented as it appeared to the Red Man." "Flora Warren Seymour was born in 1888 in Cleveland, Ohio, to Charles Payne and Eleanor De Forest (Potter) Smith. She attended George Washington University and received a B. A. In 1906. She edited Quest magazine from 1908 to 1912 and was associate editor of the Woman Lawyers Journal in 1918. She studied law, receiving an LL. B. From the Washington College of Law in 1915 and an LL. M. From the Kent College of Law in Chicago in 1916. She was admitted to the District of Columbia Bar in 1915, to the Illinois Bar in 1916, and to practice before the Supreme Court of the United States in 1919. She married George Steele Seymour in 1915 and worked for the United States Indian Service while getting her degrees. Seymour and her husband organized the Order of Bookfellows, a national society of writers and readers. She became the first woman member of the Board of Indian Commissioners in 1922, and in 1926 began writing about the Native Americans she had studied. Seymour wrote The Indians Today in 1926, followed by Story of the Red Man in 1929."

Title: The Story of the Red Man

The Story of the Red Man