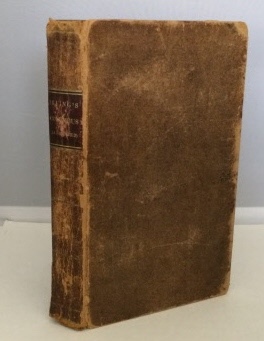 The Life and Voyage of Christopher Columbus (abridged by the author)

First American Edition thus - following the first American Edition of 1829, this edition is abridged by the author. This copy is in Very Good- to Near Very Good condition and was issued without a dust jacket. The book is bound in full leather and has a leather spine label. The text pages are generally clean," though there is noticeable foxing throughout, especially on the pastedown pages and endpapers. There is a previous owner's inked name which has faded over time. W"ashington Irving (April 3, 1783 November 28, 1859) was an American short story writer, essayist, biographer, historian, and diplomat of the early 19th century. He is best known for his short stories "Rip Van Winkle" (1819) and "The Legend of Sleepy Hollow" (1820) , both of which appear in his book The Sketch Book of Geoffrey Crayon, Gent. His historical works include biographies of George Washington, Oliver Goldsmith and Muhammad, and several histories of 15th-century Spain dealing with subjects such as Christopher Columbus, the Moors and the Alhambra. Irving served as the U. S. Ambassador to Spain from 1842 to 1846."

Title: The Life and Voyage of Christopher Columbus (abridged by the author)

By: Weigle, Oscar (adapted and Abridged by) from the story by Carlo Collodi

The Goblin Companion A Field Guide to Goblins

The Life and Voyage of Christopher Columbus (abridged by the author)