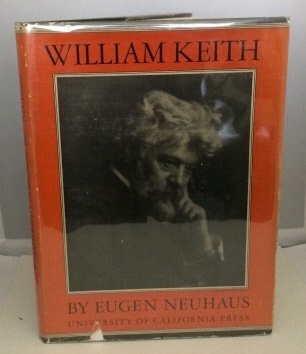 William Keith The Man and the Artist

B&W Illustrations; SIGNED EDITION. This book is in Fine condition and has a Very Good- dust jacket. The book and its contents are in clean, bright condition. The text pages are clean and bright. This book has been signed by the author, with an inscription, on the half title page. The text pages are clean and bright. The dust jacket has several edge tears, nicks and smallish chips missing along with a crack to the front flap joint, some rubbing and ground-in dirt and wear to the rear cover. "In attempting to estimate Keith's work as an artist a quarter of a century after his death, one has the perspective necessary for an objective judgment. Those who took his measure during his lifetime were, I think, too close to him to judge him truly." "Karl Eugen Neuhaus was a painter born in Barmen (Wuppertal) , Germany on September 18, 1879. Early in life Neuhaus worked as a house painter while studying at the Royal Art School in Kassel and the Berlin Royal Institute for Applied Arts. He immigrated to San Francisco in 1904 and established a studio across the hall from William Keith at 414 Pine Street. After the disaster of 1906, he lived briefly on the Monterey Peninsula and was one of the founders of the Del Monte Art Gallery. From 1907-09 he taught at the San Francisco Institute of Art and, from 1908-49, was head of the art department at University of California, Berkeley. At the Panama-Pacific International Exposition of 1915 he served on the International Jury of Awards and exhibited six entries. He often signed his paintings with his initials "EN". Neuhaus lectured all over the state on art history and was the author of several books on the subject. Some of his more notable books are: Art of the Exposition, Galleries of the Exposition, History and Ideals of American Art, William Keith: the Man and the Artist, Art of Treasure Island, and his autobiography, Drawn From Memory. His Impressionist landscapes and still lifes, as well as his contribution as a teacher and writer, have earned him a lasting place in California art. He died in Berkeley, California on October 29, 1963." "William Keith (November 18, 1838 – April 13, 1911) was a Scottish-American painter famous for his California landscapes. He is associated with Tonalism and the American Barbizon school. Although most of his career was spent in California, he started out in New York, made two extended study trips to Europe, and had a studio in Boston in 1871-72 and one in New York in 1880." ; Signed by Author

Title: William Keith The Man and the Artist

William Keith The Man and the Artist