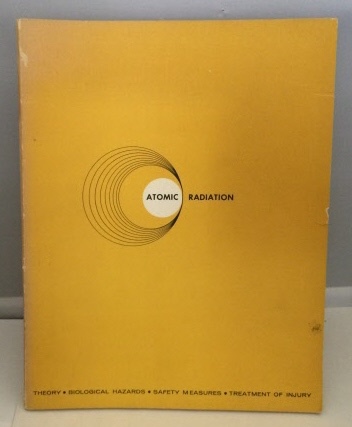 B&W Photographs; This is an oversized paperback book with cardstock covers and a stapled binding. The book is in Very Good+ condition and was issued without a dust jacket. The book and its contents are in mostly clean, bright condition. The covers have some generalized toning and there is rubbing to the spine joints. The front cover has some small spots of ground-in dirt as well. The text pages are clean and bright. "This manual discusses the following topics pertinent ot power and research applications of nuclear energy: nuclear physics, observed biological effects of radiation, shielding methods, monitoring instruments, medical evaluation of personnel, treatment of injuries, and permissible doses." "Why is ionizing radiation dangerous? When atoms in living cells become ionized one of three things usually happen – the cell dies, the cell repairs itself, or the cell mutates incorrectly and can become cancerous. Not all cells are affected by ionizing radiation in the same way. The cells that reproduce the most and are the least specialized are the most likely to be affected by ionizing radiation, for example those in a forming fetus. Radiation is effective as a cancer treatment because it can kill the cancer cells, however it can also kill or damage nearby cells. When radiation is used to treat cancer it must be pinpointed very carefully. New technologies, similar to imaging techniques used in CT scans, called TomoTherapy help pinpoint radiation treatment. TomoTherapy allows radiologists to apply the ionizing energy directly to the perimeter and within the tumor while avoiding the healthy cells surrounding it. Some aggressive cancers, such as liver cancer, are being treated with a new internal method or radiation therapy. Sent through an artery that feeds the liver, microscopic encapsulated spheres containing radioactive isotopes get directly embedded into the liver and destroy cancer cells. Even though this type of treatment is new, internal radiation treatment is not new. Internal radiation treatment is called brachytherapy. The National Cancer Institute, has a plethora of information on radiation treatments of cancer, and other cancer treatments."