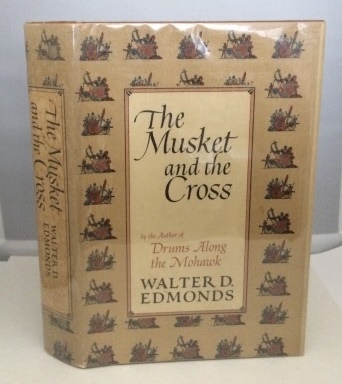 B&W Illustrations; This book is in Very Good+ to Near Fine- condition and has a Very Good+ dust jacket. The book and its contents are in clean, bright condition. The text pages are clean and bright. All edges of the text block have some light to medium toning and spotting / foxing. The dust jacket has some light edge wear and nicking to the spine ends and corners along with a couple of small edge tears to the bottom spine ends. "...is a historical chronicle of colonial America from its earliest settlement to the early eighteenth century. The focus of this vast undertaking is the protracted, complex struggle between France and England for possession of North America, a struggle Mr. Edmonds calls the most momentous and far reaching - brought to issue on the continent until the Civil War." "In 1929, he published his first novel, Rome Haul, a work about the Erie Canal. The novel was adapted for the 1934 play The Farmer Takes a Wife and the 1935 film of the same name. He married Eleanor Stetson in 1930. Drums Along the Mohawk was on the bestseller list for two years, second only to Margaret Mitchell's famous 1936 novel Gone with the Wind for part of that time. Bert Breen's Barn was a winner of the 1976 National Book Award in category Children's Books. Edmonds eventually published 34 books, many for children, as well as a number of magazine stories. He won the Lewis Carroll Shelf Award in 1960 and the Newbery Medal in 1942, for The Matchlock Gun, and the National Book Award for Children's Literature in 1976, for Bert Breen's Barn. When Eleanor died in 1956, Walter married Katherine Howe Baker Carr, who died in 1989. Walter Edmonds died in Concord, Massachusetts, in 1998."

Title: The Musket and the Cross The Struggle of France and England for North America