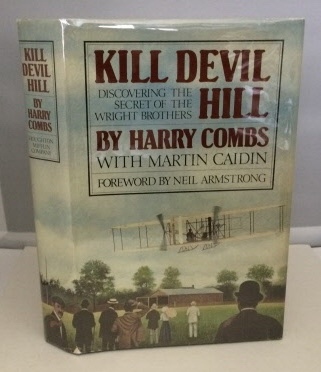 Kill Devil Hill Discovering the Secret of the Wright Brothers

By: Combs, Harry with Martin Caidin (with A Foreword by Neil Armstrong)

B&W Illustrations; This book is in Fine condition and a Very Good+ dust jacket. The book and its contents are in clean, bright condition. The spine ends of the book covers have some beginning bumping. The text pages are clean and bright. The dust jacket is mostly clean and bright, but does have edge wear, nicking and rubbing to the spine ends and corners. "Harry Combs (27 January 1913 – 23 December 2003) was a United States aviation pioneer and author of many fiction and non-fiction books from Denver, Colorado. Harry Combs "lived and breathed the Golden and Jet Ages of aviation" according to the governmental U. S. Centennial of Flight Commission, in a 2003 press release. The release stated that Combs saw his first airplane at the age of four-and-a-half and also in his youth was influenced by the book "Diary of an Unknown Aviator"—a World War I chronicle by Elliot White Springs. Combs' father, Albert, was shot down twice in World War I, and was said to have warned his son never to set foot in an airplane. Nonetheless, the young Combs paid $2.50 for a ride in a mail plane at the age of 13; then, two years later, inspired by an advertisement for $99 flying lessons, made his way to St. Louis, MO for three hours of flight instruction, soloing immediately thereafter."

Author Name: Combs, Harry with Martin Caidin (with A Foreword by Neil Armstrong)

Kill Devil Hill Discovering the Secret of the Wright Brothers