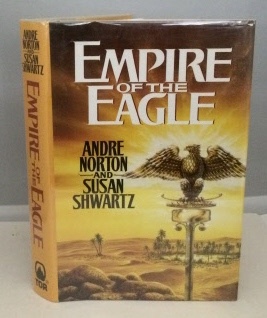 Empire of the Eagle

This book is in Fine condition and has a Very Good+ to Near Fine- dust jacket. The book and its contents are in clean, bright condition. The text pages are clean and bright. The dust jacket is crisp and clean, with the exception of a small rubbed spot to the top front flap corner and some light wear and one semi-closed tear to the top spine end. "The young Roman soldier Quintus shares the dream of every man in the Imperial army: To grow old and honorable in its service, to earn his wooden sword and land at life's end. But Quintus is also driven by a stronger need - he longs to reclaim his family's honor that was torn asunder, caught in the bloody arena of Rome's politics." "She wrote more than a dozen speculative fiction series, but her longest, and longest-running project was "Witch World", which began with the novel Witch World in 1963. The first six novels were Ace Books paperback originals published from 1963 to 1968. From the 1970s most of the series was published in hardcover editions. From the 1980s some were written by Norton and a co-author, and others were anthologies of short fiction for which she was editor. (Witch World became a shared universe). There were dozens of books in all. Norton was twice nominated for the Hugo Award, in 1964 for the novel Witch World and in 1967 for the novelette "Wizard's World"."

Title: Empire of the Eagle

Empire of the Eagle