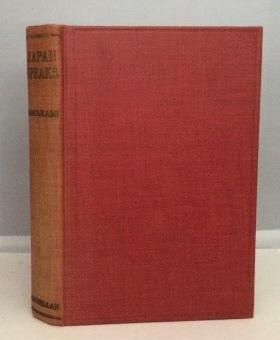 By: Kawakami, K. K. (with An Introduction by His Excellency Tsuyoshi Inukai)

This book is in Very Good+ condition and is lacking a dust jacket. The book and its contents are in generally clean, bright condition. The spine of the book has some fading and some beginning bumping to the spine ends. The text pages are clean and bright. The map at the end of the book is in clean bright condition. "Kiyoshi "Karl" Kawakami (8 August 1873 – 12 October 1949) was a Japanese Christian journalist who published several books in the United States and the United Kingdom. He was born in Yonezawa, educated in the law in Japan, and was for a short time engaged in newspaper work in that country. He sometimes wrote under the name of K. K. Kawakami. Although Japanese do not have middle names, he is said to have been a socialist in his youth, when he apparently adopted the middle name "Karl" (from Karl Marx). I n 1901 he travelled to the United States and studied at the universities of Iowa and Wisconsin. In 1905, engaged in journalism, he traveled extensively in China, Siberia, and Russia. He was a correspondent for leading newspapers in Tokyo and a frequent contributor to American magazines and newspapers."

Author Name: Kawakami, K. K. (with An Introduction by His Excellency Tsuyoshi Inukai)