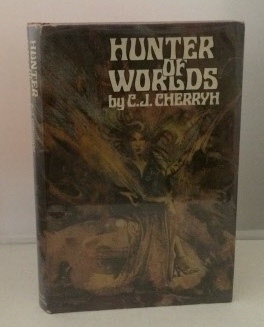 Cover Art; This is the true First Edition (published prior to the paperback edition). With code H06 on page 213 and no statement of printing on the copyright page. This book is in Fine condition and has a Very Good+ to Near Fine - dust jacket. The book and its contents are in clean, bright condition. The text pages are clean and bright. The dust jacket has some beginning edge wear and nicking to the spine ends and corners. "A million people were about to die! The entire population of the planet Priamos was marked for death if one person on the surface could not be found in time. The staggering order was emotionless and inhuman - exactly like the Iduve, the strange aliens who handed down the decree." "After graduation, Cherryh taught Latin, Ancient Greek, the classics, and ancient history at John Marshall High School in the Oklahoma City public school system. While her job was teaching Latin, her passion was the history, religion, and culture of Rome and Ancient Greece. During the summers, she would conduct student tours of the ancient ruins in England, France, Spain, and Italy. In her spare time, she would write, using the mythology of Rome and Greece as plots for her stories of the future. Cherryh did not follow the professional path typical of science fiction writers at the time, which was to first publish short stories in science fiction and fantasy magazines and then progress to novels. In fact, Cherryh did not consider writing short stories until after she had several novels published. Instead, Cherryh wrote novels in her spare time away from teaching and submitted these manuscripts directly for publication. Initially, she met with little success. In fact, she was forced to re-write some of her early works when various publishers lost the manuscripts she submitted. Retyping from carbon copies of her manuscripts was cheaper than paying for photocopying, and, in effect, forced her to rewrite those lost manuscripts (using carbon paper to make at least one copy of a manuscript was standard practice until the advent of the personal computer)."