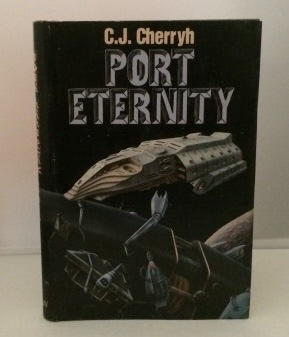 This is the first Hardback edition of the book with NO code at the rear of the text pages. This book is in Near Fine condition and has a Very Good+ dust jacket. The book and its contents are in clean, bright condition. The text pages are clean and bright. The dust jacket is mostly, with two very small semi-closed edge tears. "The Maid of Astolat, a sleek, exquisitely beautiful luxury ship is owned by the rich and slightly spoiled Dela Kirn. For Dela, The Maid is a plaything, but for the tight-knit family of androids who run and serve on her, The Maid is a beloved home. In order to live out her fantasy of a medieval Lady and her court, Dela has named the androids after characters in Tennyson's great epic of King Arthur and the Round Table, The Idylls of the King." "Her breakthrough came in 1975 when Donald A. Wollheim purchased both manuscripts she had submitted to DAW Books, Gate of Ivrel and Brothers of Earth. Cherryh stated in an interview on Amazing Stories, "It was the first time a book really found an ending and really worked, because I had made contact with Don Wollheim at DAW, found him interested, and was able to write for a specific editor whose body of work and type of story I knew. It was a good match. It was a set of characters Id invented when I was, oh, about thirteen. So it was an old favorite of my untold stories, and ended up being the first in print." The two novels were published in 1976, Gate of Ivrel preceding Brothers of Earth by several months (although she had completed and submitted Brothers of Earth first). The books won her immediate recognition and the John W. Campbell Award for Best New Writer in 1977."