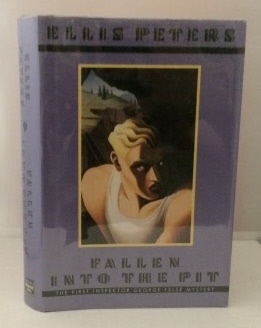 Fallen into the Pit

This book is in Fine condition and has a Fine dust jacket. The book and its contents are in clean, bright condition. The text pages are clean and bright. The dust jacket is crisp and clean. "A classics master who fought with the Resistance, Wedderburn comes home to Comerford to teach school. Ironically, when the peace of the little village is shattered by the murder of a former German Prisoner of war, it is the peaceful Wedderburn who becomes the primary suspect." Originally published in the UK in 1951. "Pargeter wrote under a number of pseudonyms; it was under the name Ellis Peters that she wrote her later crime stories, especially the highly popular series of Brother Cadfael medieval mysteries, a Benedictine monk at the Abbey in Shrewsbury. That pseudonym was drawn from the name of her brother, Ellis, and a version of the name of the daughter of friends, Petra. Many of the novels were made into films for television. Although she won her first award for a novel written in 1963, her greatest fame and sales came with the Cadfael Chronicles, which began in 1977."

Title: Fallen into the Pit

Fallen into the Pit