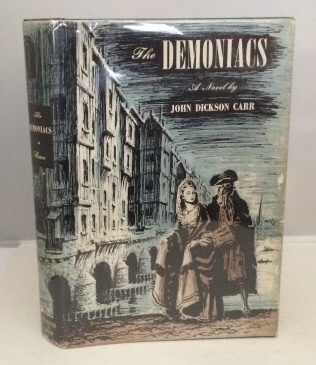 This is a stand-alone historical mystery by the author best known for his Dr. Fell and Sir Henry Merrivale mysteries. The book is in Near Fine condition and has a Very Good+ dust jacket. The book and its contents are in clean, bright condition. The text pages are clean and bright. There is some light toning to the edges of the text block. The dust jacket has several small edge nicks and some light edge wear and rubbing along with spots of discoloration / toning / foxing to the rear cover. "In the year 1757 a young man named Jeffrey Wynne, lean of face and form, gallantly rescued his true love, black-eyed Peg Ralston, at her uncle Mortimer's command, from Paris and apparently, a house of ill repute. Peg was beautiful, orphaned, fiery, soon to be an heiress, and, though not entirely virtuous (Jeffrey was invovled here) , deserved far better than what seemed to be in store for her. For back in London she was confronted by the lady in her uncle's life, Lavvy Cresswell, pale of hair, cold of eye. Thanks to Lavvy, it would seem, Peg was destined for Newgate Prison, sentenced as a wayward minor." "Carr is generally regarded as one of the greatest writers of so-called "Golden Age" mysteries; complex, plot-driven stories in which the puzzle is paramount. He was influenced in this regard by the works of Gaston Leroux and by the Father Brown stories of G. K. Chesterton. He was a master of so-called locked room mystery, in which a detective solves apparently impossible crimes. The Dr. Fell mystery The Hollow Man (1935) , usually considered Carr's masterpiece, was selected during 1981 as the best locked-room mystery of all time by a panel of 17 mystery authors and reviewers. He was also an author of historical mystery."

Title: The Demoniacs A Novel