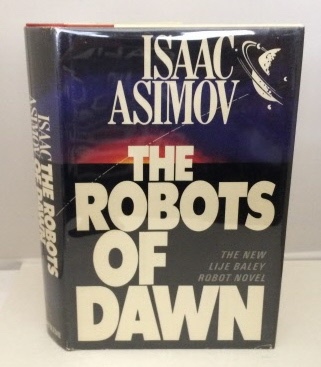 The Robots of Dawn The New Lije Baley Robot Novel

Cover Art; This book is in Near Fine condition and has a Very Good+ to Near Fine- dust jacket. The book and its contents are in clean, bright condition. There is some beginning toning to the endpapers. The dust jacket has some light edge wear and nicking to the spine ends and edges. "A puzzling case of roboticide takes interplanetary detective Elijah Baley from Earth to the planet Aurora the self-styled World of the Dawn, where humans and robots coexist in seemingly perfect harmony. There, the most advanced robot in the Universe - an awesomely human machine - has been murdered." "Asimov wrote hard science fiction and, along with Robert A. Heinlein and Arthur C. Clarke, he was considered one of the "Big Three" science fiction writers during his lifetime. Asimov's most famous work is the Foundation Series; his other major series are the Galactic Empire series and the Robot series. The Galactic Empire novels are explicitly set in earlier history of the same fictional universe as the Foundation series. Later, beginning with Foundation's Edge, he linked this distant future to the Robot and Spacer stories, creating a unified "future history" for his stories much like those pioneered by Robert A. Heinlein and previously produced by Cordwainer Smith and Poul Anderson. He wrote hundreds of short stories, including the social science fiction "Nightfall", which in 1964 was voted by the Science Fiction Writers of America the best short science fiction story of all time. Asimov wrote the Lucky Starr series of juvenile science-fiction novels using the pen name Paul French."

The Robots of Dawn The New Lije Baley Robot Novel