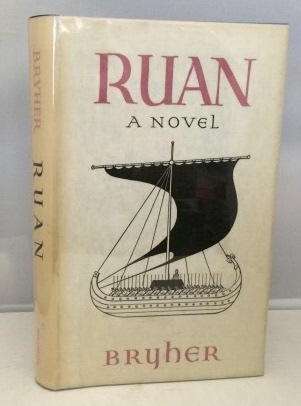 This is a Review Copy. This book is in Fine condition and has a Near Fine dust jacket. The book and its contents are in clean, bright condition. The text pages are clean and bright. There is a beginning hint of toning to the edges of the endpapers. The dust jacket has some noticeable toning to the spine and spine joints. "In this her latest magical evocation of the past, she takes the reader into sixth-century Britain, to Cornwall, the Scillys, Ireland, and Wales. Young Ruan, nephew of the Druid high priest, is destined and prepared for the priesthood. Turbulent, avid for adventure, and restless for fulfillment, he feels caged in the monotonous schooling of the Celtic priests, and longs for the high seas." "Bryher (2 September 1894 28 January 1983) was the pen name of the English novelist, poet, memoirist, and magazine editor Annie Winifred Ellerman, of the Ellerman ship-owning family. She was a major figure of the international set in Paris in the 1920s, using her fortune to help many struggling writers. With her lesbian lover Hilda Doolittle (H. D. ) and Scottish writer Kenneth Macpherson, she launched the film magazine Close Up, which introduced Sergei Eisensteins work to British viewers. From her home in Switzerland, she helped to evacuate Jews from Hitlers Germany, and then became a popular historical novelist."