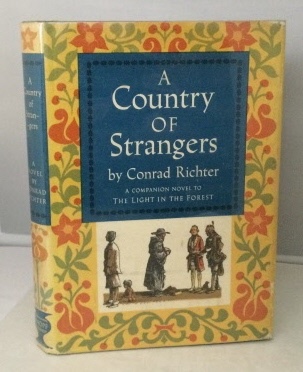 This book is in Very Good+ to Near Fine- condition and has a Very Good+ dust jacket. The book and its contents are in clean, bright condition. The text pages are clean and bright. There is a previous owner's name inked on the front pastedown page (only visible when the dust jacket flap is lifted up). The dust jacket has several small semi-closed edge tears to the spine ends and corners along with some light rubbing to the front flap joint, some light ground-in dirt and very beginning foxing to the rear dust jacket flap and some beginning fading to the spine of the dust jacket. "A Country of Strangers, a companion novel to Mr. Richter's classic The Light in the Forest, is the chronicle of a white girl captive of the Indians returned against her will to her white home. She has been adopted into an Indian family as a child and married early to an Indian. The story begins when she and her small son embark on what in thos primitive days was an epic journey, first from tribe to tribe in what is now Ohio, thence to the foreign land of the Plantschenam, or Frenchman, at Fort Detroit, from there over the Great Lakes and several streams to the home of a fellow captive in central New York, and at last upon more streams and a broad river to the door of her father, who is a prominent assembly man in colonial Pennsylvania." "Richter's novel The Light in the Forest (1953) , set in late eighteenth-century Pennsylvania and Ohio, featured challenges faced by a young white man who had become an assimilated Lenape Amerindian after being taken captive as a child. After the boy was returned as a youth to white culture, he was considered suspicious. This novel also became very popular and had a second life as a movie, released in 1958. Richter returned to the topic of the white child raised in an alien culture in his later novel A Country of Strangers (1966). As noted by Ernest Cady in his review in the Columbus Dispatch, both books were written from the point of view of Indians."

Title: A Country of Strangers