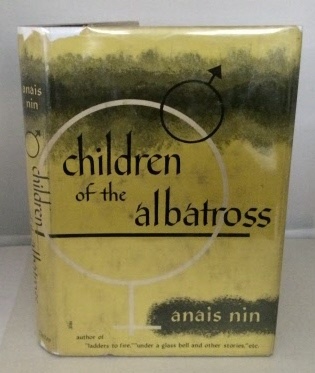 This book is in Very Good+ condition and has a Very Good- dust jacket. The book and its contents are in clean, bright condition. The text pages are clean and bright. All edges of the text block have some ground-in dirt, especially the top edge. The dust jacket has some generalized rubbing, edge wear, small nicks and tears and several small to smallish edge chips, especially the top spine end. There is a small, inked notation on the rear endpaper. "Nin was a friend, and in some cases lover, of many leading literary figures, including Henry Miller, John Steinbeck, Antonin Artaud, Edmund Wilson, Gore Vidal, James Agee, James Leo Herlihy, and Lawrence Durrell. Her passionate love affair and friendship with Miller strongly influenced her both sexually and as an author. Nin wrote about her infatuation with the Surrealist artist Bridget Bate Tichenor in her diaries. Claims that Nin was bisexual were given added circulation by the Philip Kaufman film Henry & June about Henry Miller and his second wife June Miller. The first unexpurgated portion of Nin's journal to be published, Henry and June, makes it clear that Nin was stirred by June to the point of saying (paraphrasing) , "I have become June," though it is unclear whether she consummated her feelings for her sexually. To both Anas and Henry, June was a femme fataleirresistible, cunning, erotic. Nin gave June money, jewelry, clothes, often leaving herself broke."

Title: Children Of The Albatross