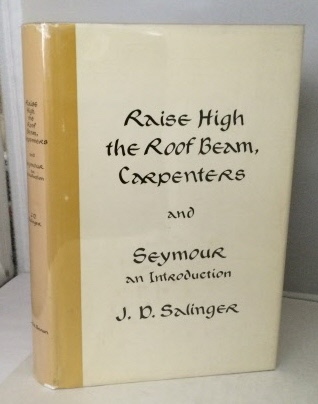 Raise High The Roof Beam, Carpenters And Seymour an Introduction

This is the third issue, with the dedication page inserted after the title page and line 12 on page 173 Seymour is spelled Seymore. This book is in Near Fine condition and has a Very Good+ dust jacket. The book and its contents are in mostly clean, bright condition. The spine ends of the book covers have some beginning bumping. The text pages are clean and bright. The dust jacket is mostly clean and bright, but does have one small chip to the bottom spine end, along with some light spots of rubbing to the spne ends and spine joints. "The two long pieces in this book originally came out in The New Yorker - Raise High the Roof Beam, Carpenter in 1955, Seymour - an Introduction in 1959. Whatever their differences in mood or effect, they are both very much concerned with Seymour Glass, who is the main character in my still-uncompleted series about the Glass family." "The success of The Catcher in the Rye led to public attention and scrutiny. Salinger became reclusive, publishing new work less frequently. He followed Catcher with a short story collection, Nine Stories (1953) ; a volume containing a novella and a short story, Franny and Zooey (1961) ; and a volume containing two novellas, Raise High the Roof Beam, Carpenters and Seymour: An Introduction (1963). His last published work, a novella entitled "Hapworth 16, 1924", appeared in The New Yorker on June 19, 1965. Afterward, Salinger struggled with unwanted attention, including a legal battle in the 1980s with biographer Ian Hamilton and the release in the late 1990s of memoirs written by two people close to him: "

Raise High The Roof Beam, Carpenters And Seymour an Introduction