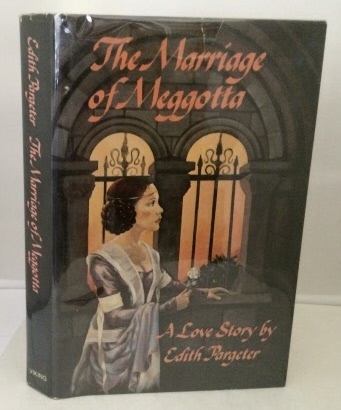 The Marriage of Meggotta

Cover Art; This book is in Near Fine condition and has a Very Good+ dust jacket. The book and its contents are in clean, bright condition. The text pages are clean and bright. There is some light toning to the front endpapers. The dust jacket has one medium sized tear to the front panel and some edge wear, rubbing and nicking to the spine ends and corners. "Heir to the earldoms of Gloucester and Hertford, Richard de Clare is but a boy when his father dies while fighting the king's battles in France. Too great a prize to be left in the keeping of his pretty mother, herself soon to be the object of royal affections, he is given by the king in guardianship to Hubert de Burgh, Henry's chief justiciar and one of the most powerful nobles of the land. Richard is sent to live at Burgh and there meets Meggotta, the adored daughter of Hubert and his wife, Margaret." "Pargeter wrote under a number of pseudonyms; it was under the name Ellis Peters that she wrote her later crime stories, especially the highly popular series of Brother Cadfael medieval mysteries, a Benedictine monk at the Abbey in Shrewsbury. That pseudonym was drawn from the name of her brother, Ellis, and a version of the name of the daughter of friends, Petra. Many of the novels were made into films for television. Although she won her first award for a novel written in 1963, her greatest fame and sales came with the Cadfael Chronicles, which began in 1977. At the time of the 19th in the series of 20 novels, sales exceeded 6.5 million. The Cadfael Chronicles drew international attention to Shrewsbury and its history, and greatly increased tourism to the town. In an interview in 1993, she mentioned her own work before the Second World War as a chemist's assistant, where they prepared many of the compounds they sold. "We used to make bottled medicine that we compounded specially, with ingredients like gentian, rosemary, horehound. You never see that nowadays; those tinctures are never prescribed. They often had bitters of some sort in them, a taste I rather liked. Some of Cadfaels prescriptions come out of those years."

Title: The Marriage of Meggotta

The Marriage of Meggotta