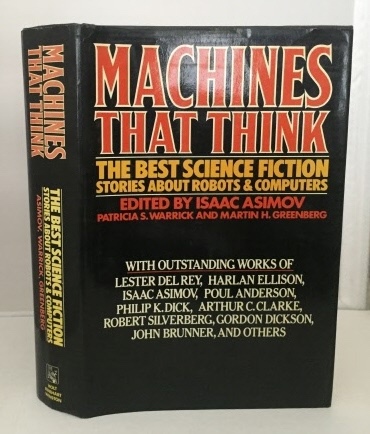 This book is in Near Fine condition and has a Near Fine dust jacket. The book and its contents are in clean, bright condition. The text pages are clean and bright. The dust jacket is crisp and clean, with some beginning wear to the spine ends. "Isaac Asimov (born Isaak Ozimov; c. January 2, 1920 – April 6, 1992) was an American writer and professor of biochemistry at Boston University. He was known for his works of science fiction and popular science. Asimov was a prolific writer, and wrote or edited more than 500 books and an estimated 90,000 letters and postcards. His books have been published in 9 of the 10 major categories of the Dewey Decimal Classification. Asimov wrote hard science fiction and, along with Robert A. Heinlein and Arthur C. Clarke, he was considered one of the "Big Three" science fiction writers during his lifetime. Asimov's most famous work is the Foundation Series; his other major series are the Galactic Empire series and the Robot series. The Galactic Empire novels are explicitly set in earlier history of the same fictional universe as the Foundation series. Later, beginning with Foundation's Edge, he linked this distant future to the Robot and Spacer stories, creating a unified "future history" for his stories much like those pioneered by Robert A. Heinlein and previously produced by Cordwainer Smith and Poul Anderson."