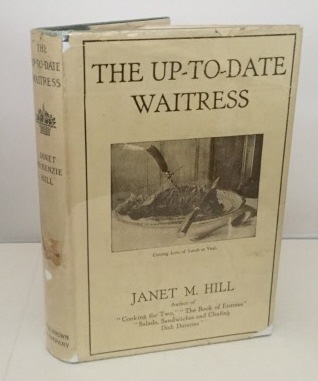 B&W Photographs; This book is in Very Good+ condition and has a Very Good dust jacket. The book and its contents are in mostly clean, bright condition. The book covers have some light bumping and rubbing to the spine end and noticeable bumping to the bottom corners of the book cover. The front cover of the book is decorated in green, black (or very dark green) and white in the image of a waitress. The text pages are clean and bright. There is a previous owner's name penciled on the front endpaper. The dust jacket has several edge tears, nicks and medium sized edge tears, along with a couple of sizeable chip missing,and one small circular spot missing on the spine of the book. There is a sticker shadow (from an apparent price tag) on the spine of the dust jacket. Scarce in dust jacket. "Janet McKenzie Hill (18521933) was a prominent early practitioner of culinary reform, food science and scientific cooking, author of many cookbooks. Hill was born in Westfield, Massachusetts, the daughter of Alexander McKenzie, a clergyman, and Nancy (Lewis) McKenzie. In 1873 she married Benjamin M. Hill. Hill took up the study of cooking and its related sciences later in life: she returned to school around age 40, graduating from the Boston Cooking School in 1892. Fannie Farmer was assistant principal at the time. In 1896 she founded the Boston Cooking School Magazine (later renamed American Cookery)." "The waitress, who understands the composition of food, the underlying principles of cookery and cleaning, the proper construction of menus, and who has had training of the reasoning powers and judgement that is incidental to such knowledge, has gained thereby a breadth of mind and quickness of perception, which fit her to meet any emergency that may arise. Such a waitress is fitted to raise her work to the grade of the so-called professions, and to command a salary in accordance with the service rendered."