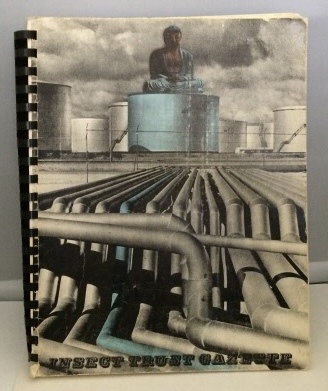 B&W Illustrations; The Insect Trust Gazette was a poetry journal edited by Leonard Belasco and William Levy (Philadelphia, 1964-1968) who published such notable writers as William S. Burroughs. A rock group in the late 1960s, The Insect Trust, was named after this journal. This edition is spiral bound, with heavy cardstock covers. The text pages are clean and bright. Included are works by: N. B. Shein, Jennifer Stevens, Friedrich Schroder-Sonnenstern, Sinclair Beiles, William Levy, Wolfgang Hallman, Jan Fort, Leonard Belasco, S. J. Leon, Charles MacDermed, Stewart Paley, William Wroth, The Heap, Jed Irwin, Stuart Gordon, Les Fram, Claude Levi-Strauss, Max Ernst, Roger Hillyard, and, Stephanie Bjorndahl. "The Gazette ran for only three issues from 1964 to 1968. Leonard Belasco, Jed Irwin, Robert Basara, and Bill Levy edited the magazine in Philadelphia and later California. The magazine got its name from a line in a Burroughs novel. Not surprisingly, Burroughs appeared in the first two issues. The magazine grew out of a literary scene surrounding Temple University. This fits a pattern shared by several of the magazines of the literary underground. A young student or students read deeply in alternative literature in many cases the work of the Beats. These students correspond with their writer heroes hoping to publish them in University sponsored channels. The powers that be at the University object to the material forcing the students to start their own literary magazine."