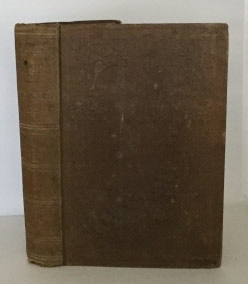 Star Papers: Or Experiences Of Art And Nature

This book is in Good to Good+ condition and was likely issued without a dust jacket. The book and its contents are in generally clean, solid condition. The spine ends and corners of the book covers have some edge wear, bumping, rubbing and fraying. The bottom rear corner has been nibbled by a rodent (just the very edge of the corner). The brown cloth cvoers are noticeably rubbed and a bit faded. The text pages are generally clean, but do have some spots of foxing throughout. "After the war, Beecher supported social reform causes such as women's suffrage and temperance. He also championed Charles Darwin's theory of evolution, stating that it was not incompatible with Christian beliefs. Widely rumored to be a womanizer, in 1872 the Woodhull & Claflin's Weekly published a story about his affair with Elizabeth Tilton, the wife of his former associate Theodore Tilton. In 1874, Tilton filed adultery charges against him for the affair. The subsequent trial, which resulted in a hung jury, was one of the most widely reported U. S trials of the century. Beecher's long career in the public spotlight led biographer Debby Applegate to call him "The Most Famous Man in America." "

Title: Star Papers: Or Experiences Of Art And Nature

Star Papers: Or Experiences Of Art And Nature