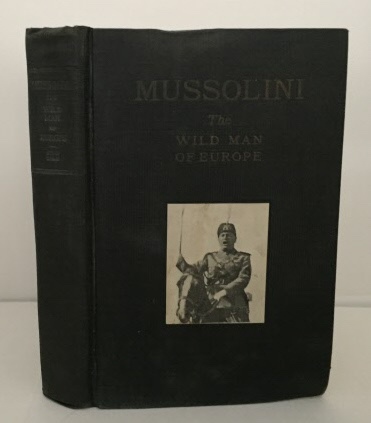 Mussolini The Wild Man of Europe

B&W Photographs; This book is in Very Good to Near Very Good+ condition and lacks a dust jacket. The book and its contents are in generally clean, bright condition. The covers have some bumping and there is a slight slant to the spine of the book. The black cloth covers have some ground-in dirt. The lettering on the spine and front cover of the book has dulled. The text pages are clean and bright. The top edge of the text block has noticeable ground-in dirt. "The American reading public has of late been deluged with Mussolinian propoganda. This propoganda has in the main been inspired by thre purposes, which are in potential or actual conflict with the best interests of the American people." "Known as Il Duce ("The Leader") , Mussolini was the founder of Italian Fascism. In 1912, Mussolini was a leading member of the National Directorate of the Italian Socialist Party (PSI) , [5] but was expelled from the PSI for advocating military intervention in World War I, in opposition to the party's stance on neutrality. Mussolini served in the Royal Italian Army during the war until he was wounded and discharged in 1917. Mussolini denounced the PSI, his views now centering on nationalism instead of socialism and later founded the fascist movement which came to oppose egalitarianism[6] and class conflict, instead advocating revolutionary nationalism transcending class lines. Following the March on Rome in October 1922, Mussolini became the youngest Prime Minister in Italian history until the appointment of Matteo Renzi in February 2014."

Mussolini The Wild Man of Europe