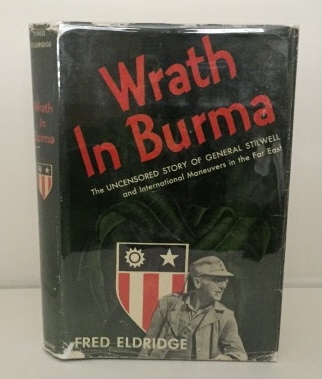 B&W Illustrations; This book is in Very Good+ to Near Fine- condition and has a Very Good dust jacket. The book and its contents are in mostly clean, bright condition. The text pages are clean and bright with the exception of an ink spot on the reverse of the half title page. The dust jacket has edge wear, nicking, several small edge chips and edge tears and some generalized edge wear. "Wrath in Burma is a lively human document of the personal anecdotes and daily happenings in Vinegar Joe Stilwell's life in Burma. It is the story of a general who was never a brass hat - who marched with his men and led them over insurmountable obstacles." "Just prior to World War II, Stilwell was recognized as the top corps commander in the Army and was initially selected to plan and command the Allied invasion of North Africa. When it became necessary to send a senior officer to China to keep that country in the War, Stilwell was selected, over his personal objections, by President Franklin Roosevelt and his old friend, Army Chief of Staff George C. Marshall. He became the Chief of Staff to Generalissimo Chiang Kai-shek, served as the commander of the China Burma India Theater responsible for all Lend-Lease supplies going to China, and later was Deputy Commander of the South East Asia Command. Unfortunately, despite his status and position in China, he soon became embroiled in conflicts over U. S. Lend-Lease aid and Chinese political sectarianism."

Title: Wrath in Burma The Uncensored Story of General Stilwell and International Maneuvers in the Far East