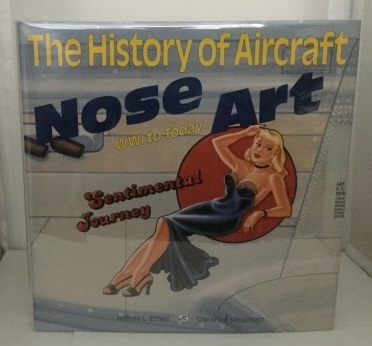 The History of Aircraft Nose Art WWI to Today

B&W and Color Illustrations; This book is in Fine condition and has a Very Good+ dust jacket. The book and its contents are in clean, bright condition. The text pages are clean and bright. The dust jacket is mostly clean and bright, but has a small tear to the top spine end and some beginning nicking to the spine ends and corners. "To friend and foe alike, the sexy pin-up paintings and names such as Sleepy-Time Gal were as much as part of the American fighters and bombers of World War II as cowboy hats and six shooters were to the wranglers of the Old West." "Nose art is a decorative painting or design on the fuselage of an aircraft, usually on the front fuselage. While begun for practical reasons of identifying friendly units, the practice evolved to express the individuality often constrained by the uniformity of the military, to evoke memories of home and peacetime life, and as a kind of psychological protection against the stresses of war and the probability of death. The appeal, in part, came from nose art not being officially approved, even when the regulations against it were not enforced."

Title: The History of Aircraft Nose Art WWI to Today

The History of Aircraft Nose Art WWI to Today