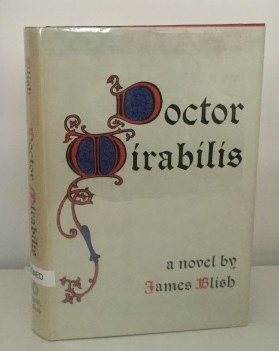 SIGNED EDITION. First American Trade Edition ( following a mimeographed, stapled limited edition). This book is in Fine condition and has a Near Fine dust jacket. The book and its contents are in clean, bright condition. The text pages are clean and bright. The dust jacket is crisp and clean, with the exception of light sunning to the spine and spine joints. This copy has been signed by the author on the title page. "Blish spent 19421944 as a medical technician in the United States Army. After the war he became the science editor for the Pfizer pharmaceutical company. His writing career progressed until eventually he gave up his job to become a full-time writer. He is credited with coining the term gas giant, in the story "Solar Plexus" as it appeared in the anthology Beyond Human Ken, edited by Judith Merril. (The story was originally published in 1941, but that version did not contain the term; Blish is thought to have added it in a rewrite done for the anthology, which was first published in 1952.) From 1962 to 1968, Blish worked for the Tobacco Institute. Then in 1968 Blish left his native United States and moved to Henley-on-Thames, England. From 1967 to 1977, Blish worked on a series of books for the Star Trek franchise. He died before the series was completed and the final volume, Star Trek 12, was co-credited to his wife." ; Signed by Author