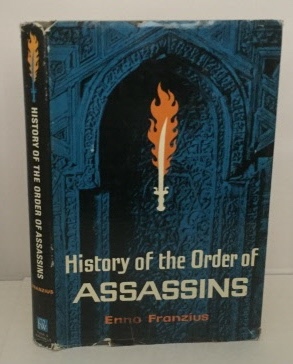 History Of The Order Of Assassins

B&W Illustrations; This book is in Very Good condition and has a Very Good- dust jacket. The book and its contents are in generally clean, bright condition. The spine ends and corners of the book covers have some light bumping and wear. The text pages are generally clean and bright. The edges of the text block have spots of discoloration. The front pastedown page has a previous owner's inked name and date. The price clipped dust jacket has several edge tears, nicks and spots of chipping along with spots of discoloration and wear. "Historian, author. Franzius was a lecturer in history at Columbia University, 1945-1958. His major published works are HISTORY OF THE BYZANTINE EMPIRE (N. Y. , Funk & Wagnalls, 1968) and HISTORY OF THE ORDER OF ASSASSINS (N. Y. , Funk & Wagnalls, 1969)." "Assassins is the term used to refer to a group of individuals who were active during the medieval period known as Nizari Ismailis. Often described as a secret order led by a mysterious "Old Man of the Mountain", the Nizari Ismailis were a sect that formed in the late 11th century from a split within Ismailism – a branch of Shia Islam. The Nizaris posed a strategic threat to Sunni Seljuq authority by capturing and inhabiting several mountain fortresses throughout Persia and later Syria, under the leadership of Hassan-i Sabbah. Asymmetric warfare, psychological warfare, and surgical strikes were often an employed tactic of the assassins, drawing their opponents into submission rather than risk killing them."

Title: History Of The Order Of Assassins

History Of The Order Of Assassins