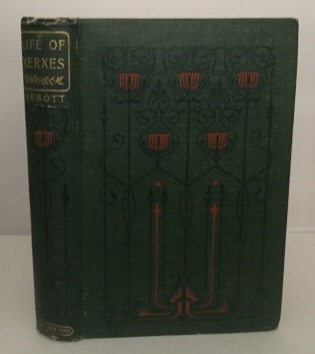 History Of Xerxes The Great

B&W Illustrations; C1900. This book is in Very Good+ condition and is lacking a dust jacket. The book and its contents are in clean, bright condition. The spine ends and corners of the book covers have some light edge wear, rubbing and beginning fraying. There are a couple of small edge tears to the spine ends of the book covers. The text pages are clean and bright. "Xerxes I (518–465 BC) , called Xerxes the Great, was the fourth king of kings of the Achaemenid dynasty of Persia. Like his predecessor Darius I, he ruled the empire at its territorial apex. He ruled from 486 BC until his assassination in 465 BC at the hands of Artabanus, the commander of the royal bodyguard. Xerxes I is most likely the Persian king identified as Ahasuerus in the biblical Book of Esther. He is also notable in Western history for his failed invasion of Greece in 480 BC. His forces temporarily overran mainland Greece north of the Isthmus of Corinth until the losses at Salamis and Plataea a year later reversed these gains and ended the second invasion decisively."

Title: History Of Xerxes The Great

History Of Xerxes The Great