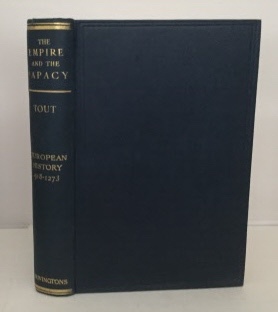 B&W Illustrations; This book is in Very Good+ condition and is lacking a dust jacket. The book and its contents are in generally clean, bright condition. The spine ends and corners of the book cover have some light bumping and edge wear. The text pages are generally clean and bright, though with some light foxing throughout. The endpapers have light, generalized toning. "In 1890, Tout left Lampeter and became Professor of History at Owens College, Manchester, (a constituent college of the Victoria University) where he stayed until 1925 (this changed to the University of Manchester in 1903). In 1894 he failed to gain the chair at Glasgow. Tout was, with James Tait, one of the two leading figures of the `Manchester History School' and is best known for his 6-volume Chapters in the Administrative History of Medieval England, whose influence still remains and was for 40 years magisterial in the shaping of late medieval English History scholarship. Concentrating, through close study of the Crown's administrative records, on how changes of government-method reflected changes in the nature of power and politics, the work stood the test of 19th century constitutional history and mid-20th century socio-political emphasis with very few fundamental criticisms of Tout's methods and conclusions."