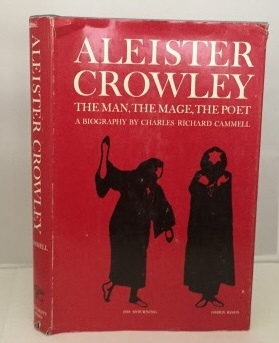 Aleister Crowley The Man, the Mage, the Poet

B&W Illustrations; This book is in Very Good+ condition and has a Very Good dust jacket. The book and its contents are in clean, bright condition. There is some beginning bumping to the spine ends of the book covers. The text pages are clean and bright. The dust jacket has several small edge tears and nicks along with some light rubbing, especially to the spine joints. "With his old mentor George Cecil Jones, Crowley continued performing the Abramelin rituals at the Ashdown Park Hotel in Coulsdon, Surrey. Crowley claimed that in doing so he attained samadhi, or union with Godhead, thereby marking a turning point in his life. Making heavy use of hashish during these rituals, he wrote an essay on "The Psychology of Hashish" (1909) in which he championed the drug as an aid to mysticism. He also claimed to have been contacted once again by Aiwass in late October and November 1907, adding that Aiwass dictated two further texts to him, "Liber VII" and "Liber Cordis Cincti Serpente", both of which were later classified in the corpus of Holy Books of Thelema. Crowley wrote down more Thelemic Holy Books during the last two months of the year, including "Liber LXVI", "Liber Arcanorum", "Liber Porta Lucis, Sub Figura X", "Liber Tau", "Liber Trigrammaton" and "Liber DCCCXIII vel Ararita", which he again claimed to have received from a preternatural source. Crowley stated that in June 1909, when the manuscript of The Book of the Law was rediscovered at Boleskine, he developed the opinion that Thelema represented objective truth."

Title: Aleister Crowley The Man, the Mage, the Poet

Aleister Crowley The Man, the Mage, the Poet