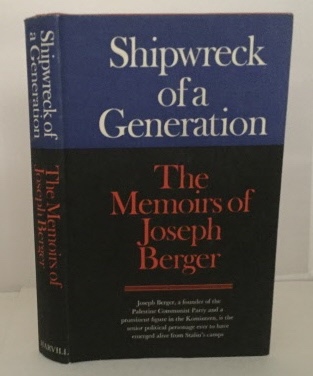 Shipwreck Of A Generation The Memoirs of Joseph Berger

This book is in Near Fine condition and has a Very Good dust jacket. The book and its contents are in clean, bright condition. There is some beginning bumping to the spine ends of the book covers. The text pages are clean and bright. The dust jacket is mostly clean and bright, but does have several edge nicks and a small chip to the bottom rear panel. "In 1924-25, Berger-Barzilai spent a few months in Moscow, where he met his wife Esther Feldman, a Russian Jew. Upon his return to Palestine, he was arrested for illegal activities in the Communist party and Comintern, but was only fined. After another trip to Moscow, the police authorities refused to let him in on August 16, 1926. As a stateless citizen, he had to remain aboard an Italian ship that sailed back and forth for six weeks. The International Aid Organization for Arrested Revolutionaries, together with Zionists, managed to obtain his release. After that, he lived in an Arab village, Beit Safafa, under false identity. He continued to lead the party and met with Comintern emissaries."

Title: Shipwreck Of A Generation The Memoirs of Joseph Berger

Shipwreck Of A Generation The Memoirs of Joseph Berger