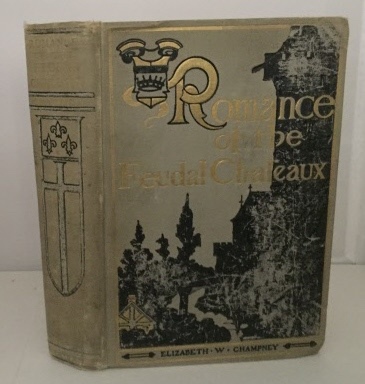 Romance Of The Feudal Chateaux Volume One Only

B&W Illustrations; This book is in Very Good condition and is lacking a dust jacket. The book and its contents are in generally clean, bright condition. The spine ends, corners and edges of the book covers have some light bumping, rubbing and beginning fraying. The covers have some generalized ground-in finger dirt and rubbing. The lettering and decoration on the spine has some rubbing and wear. The text pages are clean and bright. There is a previous owner's inked gift notation on the front endpaper. The rear inner hinge has cracked and been repaired. The front inner hinge has started - there's a two inch crack to the bottom inner hinge. Several of the illustrated plates are missing their tissue guards. "From 1899, Champney concentrated on more adult books, writing romantic, semi-fictional descriptions and stories of foreign locations, beginning with The Romance of the Feudal Chäteaux. She ultimately wrote nine books in this "Romance" series, the last of which, The Romance of Russia, from Rurik to Bolshevik, was published in 1921, one year before her death in 1922. The books in this series were published by G. P. Putnam's Sons. In addition to her three main series of books, Champney also had several other books published. Her husband James Wells Champney died in an elevator accident in New York City in 1903, after which Elizabeth moved to the West Coast, where she lived near her son Edouard until her death. The last of her "Romance" books were co-written with her son."

Title: Romance Of The Feudal Chateaux Volume One Only

Romance Of The Feudal Chateaux Volume One Only