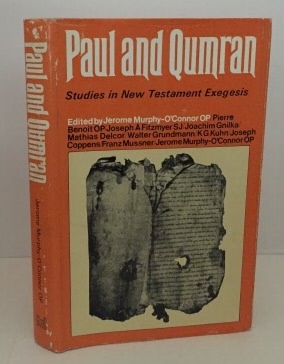 By: Murphy-O'connor, Jerome (edited by)

This book is in Very Good+ condition and has a Very Good dust jacket. The book and its contents are in mostly clean, bright condition. The spine ends of the book covers have some light bumping. The text pages are clean and bright. There is an ink stamped previous owner's name and address on the front endpaper. The dust jacket is generally clean and bright, but does have some noticeable rubbing to the spine, spine and flap joints and corners. "Reverend Fr. Dr. Jerome Murphy-O'Connor, O. P. (born 10 April 1935, Cork City, Ireland – died 11 November 2013, Jerusalem) was a Dominican priest, a leading authority on St. Paul and Professor of New Testament at the École Biblique in Jerusalem, a position that he held from 1967 until his death...Oxford University Press invited him to write an archaeological guide to the Holy Land which was published in 1980. This was translated into several languages with a revised edition in 1986, and has become the standard guide-book. Murphy-O'Connor lectured around the world and made numerous television appearances, including in Le Mystère Paul (2000) , Jesus: The Complete Story (2001) , The Search for John the Baptist (2005) , The Lost Tomb of Jesus (2007) , and Christianity: A History for Channel 4 (2009)"