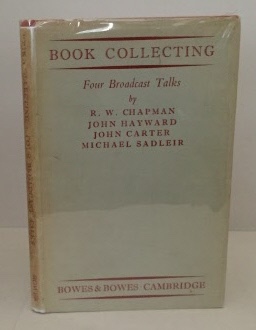 Review copy with a laid-in review sheet. This book is in Very Good+ condition and has a Very Good- dust jacket. The book and its contents are in generally clean, bright condition. There is some light bumping and rubbing to the spine ends and corners of the book covers. The text pages are clean and bright. The dust jacket has generalized toning to the spine and rear panel. The spine ends of the dust jacket have nicking and smallish chips. "Robert William Chapman (5 October 1881 in Eskbank, Scotland 20 April 1960 in Oxford) , usually known in print as R. W. Chapman, was a British scholar, book collector and editor of the works of Samuel Johnson and Jane Austen...Although Chapman is generally credited as the scholar who established Austens canonical status in the twentieth century, his wife played a key role in igniting his interest in book collecting as well as Jane Austens works. He himself cited her antiquarian interests as the inspiration of his book collecting career, and her editions of Pride and Prejudice and Northanger Abbey both preceded Chapmans own. Her contribution to his work is self-evident in her ubiquitous handwriting in the Chapman archives. However, Chapmans own negligence in acknowledging his wifes contribution to his Jane Austen edition caused her work to go uncredited until later scholars such as David Gilson and Kathryn Sutherland proved otherwise. "