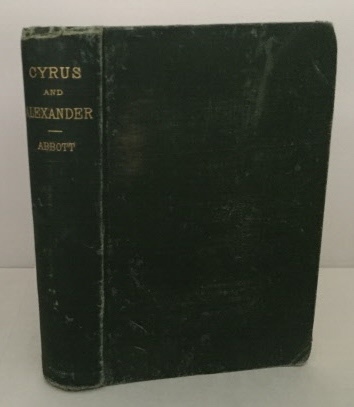 Histories Of Cyrus The Great And Alexander The Great

By: Abbott, Jacob (with Revisions and An Appendix by Lyman Abbott)

B&W Illustrations; This book is in Very Good condition and is lacking a dust jacket. The book and its contents are in generally clean condition. The spine ends and corners of the book covers have some light bumping, rubbing and wear, along with some light fraying. The spine joints have rubbing as well. There are spots of ground-in dirt and rubbing to the covers. The text pages are mostly clean and bright. The rear endpaper and pastedown have faint crayon scribbles. One to two more text pages towards the rear of the book have faint crayon scribbles as well. "The reign of Cyrus the Great lasted c. 30 years. Cyrus built his empire by conquering first the Median Empire, then the Lydian Empire, and eventually the Neo-Babylonian Empire. Either before or after Babylon, he led an expedition into central Asia, which resulted in major campaigns that were described as having brought "into subjection every nation without exception". Cyrus did not venture into Egypt, as he himself died in battle, fighting the Massagetae along the Syr Darya in December 530 BC. He was succeeded by his son, Cambyses II, who managed to add to the empire by conquering Egypt, Nubia, and Cyrenaica during his short rule."

Title: Histories Of Cyrus The Great And Alexander The Great

Author Name: Abbott, Jacob (with Revisions and An Appendix by Lyman Abbott)

Histories Of Cyrus The Great And Alexander The Great