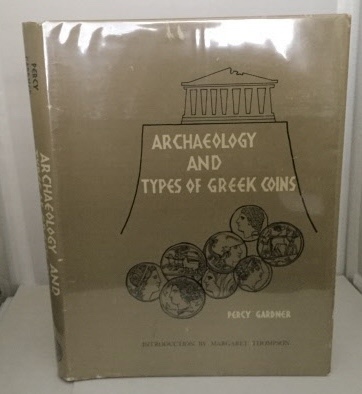 By: Gardner, Percy (with An Introduction by Margaret Thompson)

B&W Photographs; This book is in Very Good+ condition and has a Very Good dust jacket. The book and its contents are in mostly clean, bright condition. There is some light rubbing to the bottom edges of the book covers. The spine ends of the book covers have some light bumping and rubbing. The text pages are clean and bright. The dust jacket is mostly clean and bright, but does have edge wear, rubbing and some nicking and tiny edge chips to the spine ends. The spine of the book has fading. "The history of ancient Greek coinage can be divided (along with most other Greek art forms) into four periods, the Archaic, the Classical, the Hellenistic and the Roman. The Archaic period extends from the introduction of coinage to the Greek world during the 7th century BC until the Persian Wars in about 480 BC. The Classical period then began, and lasted until the conquests of Alexander the Great in about 330 BC, which began the Hellenistic period, extending until the Roman absorption of the Greek world in the 1st century BC. The Greek cities continued to produce their own coins for several more centuries under Roman rule. The coins produced during this period are called Roman provincial coins or Greek Imperial Coins."

Author Name: Gardner, Percy (with An Introduction by Margaret Thompson)