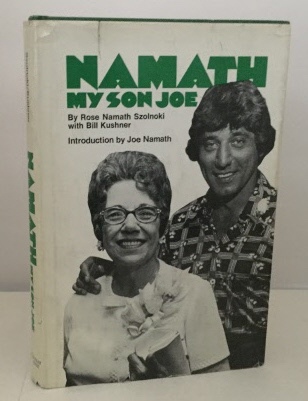 B&W Illustrations; This book is in Near Fine condition and has a Very Good- dust jacket. The book and its contents are in mostly clean, bright condition. There is some light bumping and rubbing to the spine ends and corners of the book covers. The text pages are clean and bright. The dust jacket has several edge tears, spots of rubbing and a couple of small chips along with some ground-in dirt, especially to the rear cover. "Joseph William Namath (born May 31, 1943) , nicknamed "Broadway Joe", is a former American football quarterback and actor. He played college football for the University of Alabama under coach Paul "Bear" Bryant from 1962 to 1964, and professional football in the American Football League (AFL) and National Football League (NFL) during the 1960s and 1970s. Namath was an AFL icon and played for that league's New York Jets for most of his professional football career. He finished his career with the Los Angeles Rams. He was elected to the Pro Football Hall of Fame in 1985."