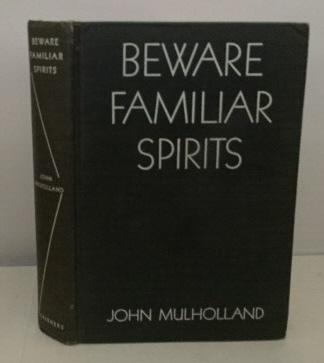 B&W Illustrations; SIGNED EDITION. This book is in Very Good to Near Very Good+ condition and is lacking a dust jacket. The book and its contents are in generally clean, bright condition. The spine ends and corners of the book covers have some light bumping and rubbing, along with some light rubbing. The spine of the book has some light fading and there are a couple of spots of discoloration to the front and rear covers. The text pages are mostly clean and bright. There is light, generalized toning to the endpapers, and one sectoin of the text has been opened badly. This copy has been signed, with an inscription on the front endpaper, by the author. "John Mulholland (9 June 1898 in Chicago, Illinois – 25 February 1970 in New York City) was an American magician, author, publisher and intelligence agent. Mulholland learned the art of magic as a teenager with John William Sargent, President of the Society of American Magicians. Mulholland was a professional magician for two decades, working in small companies and large stage shows. He ran one of the first magic workshops and was from 1930 the editor of the magical trade magazine The Sphinx. He published many books on magic and its history. Mulholland was a close friend of Harry Houdini . Mulholland asserted that "Houdini once told me that he considered no man to be a magician until he was able skillfully to perform the cups and balls....Mulholland had criticized the claims of parapsychology and exposed the tricks of fraudulent spiritualist mediums. His book Beware Familiar Spirits (1938) revealed many of these tricks." ; Signed by Author