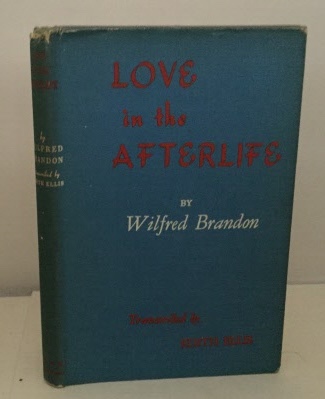 Love In The Afterlife

This book is in Very Good+ condition and has a Very Good+ dust jacket. The book and its contents are in mostly clean, bright condition. The spine ends and corners of the book covers have some light bumping. The text pages are clean and bright. There is an inkstamped previous owner's name and address on the front endpaper. The dust jacket has a couple of small edge nicks and chips, along with some toning to the spine and edges of the dust jacket. "Ellis had her fascinating quirks. As her theatrical career wound down in the mid-1930s, she took up an avid interest in (using modern terminology) channeling the dead. She claimed to transcribe works by none other than George Washington (whom she claimed demanded she transcribe his definitive autobiography in a receptive transcendent state) and common citizens such as a New England farm boy named Wilfred Brandon, supposedly killed in the Revolutionary War. These oddly entertaining works attracted enough attention to warrant several printings ("Incarnation: a Plea from the Masters," first edition 1936, 1951 reprint + UK/European editions). She was plagued with vision problems by her 60s and died at what is generally believed to be age 84, although her birth date is in dispute."

Title: Love In The Afterlife

Love In The Afterlife