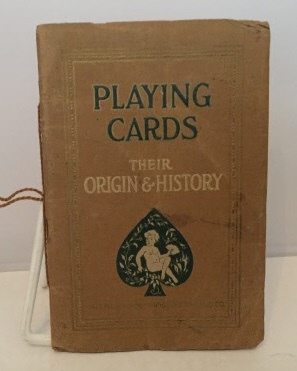 This is a small format pamphlet with decorated paper covers and a string tied and stapled spine. The pamphlet is in Very Good condition. There is some bumping and edge wear to the spine ends and corners of the book covers. The text pages are mostly clean and bright. The text has some light creasing. Written by a later relative of the original founder (Lewis Cohen) , the book gives a general history of cards and card games in India (Hindostan) , their spread throughout Asia and Europe, and then to America. "The New York Consolidated Card Company was formed in 1871 by the merging of three earlier firms which had flourished during the mid-19th century. These were Lawrence & Cohen (which had been founded in 1832 by Lewis I. Cohen) , Samuel Hart & Co (founded c.1849 by Samuel Hart) and John J. Levy."

Title: Some Interesting Facts About The Origin And History Of Playing Cards